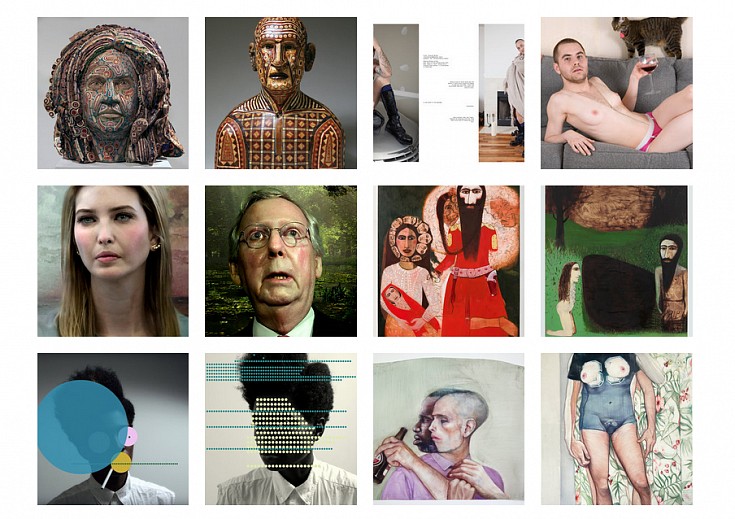 C24 Gallery in partnership with The New York Foundation for the Arts presents Facial Profiling, a multimedia exhibition curated by David C. Terry, director and curator of Grants and Exhibitions at NYFA. Facial Profiling investigates the concepts of the observed self with over 50 new works by seven NYSCA/NYFA Artist Fellows: Samira Abbassy, Kwesi Abbensetts, Geoffrey Chadsey, Sean Fader, Michael Ferris, Jr., Kymia Nawabi, and Oliver Wasow.  Facial Profiling will be on view July 20 - September 30, 2017 with an opening reception on Thursday July 20 from 6:30pm - 8:30pm at C24 Gallery.

Unified through the explorations of the perceived and projected self, the participating artists examine the notions and visual representation of identity as formed and influenced by place, culture, gender, and conformity. The resulting artworks ask the viewer to question how we interpret portraiture.

Referential to symbols and icons of ancient civilizations, juxtaposed to effigies of contemporary society, the works of Samira Abbassy, Michael Ferris Jr. and Kymia Nawabi uniquely address representation and cultural identity.  Each artist looks to cultural heritage to investigate how the relationship to traditions and collective experiences form cultural identity.

Kwesi Abbensetts and Sean Fader's photographs share an exploration in the conscious presentation of persona. Technology and social media are dominant tools in contemporary society that allow people to control or change their character, or identity as presented to or perceived by others. These digital tools act as a mask to reality.

Oliver Wasow and Geoffrey Chadsey's imaginative portraits are influenced by imagery from the public collective, reworked and reimagined. Wasow's portraits of contemporary political figures project a conceptualized representation, imprinted by opinion, of the interior world of powerful figures, illustrated by the atmosphere of the portrait. Chadesy's drawings are collected from random social websites. The figures are transformed by materialized projections of fantasy into a merging of identities.